Why yuo have to be in everyone's business

we are ok but free palestine plox

Stop of cutting the hands off

Abkhaziaball is a Northern Irish partially recognized countryball in the Caucasus. It is a separatist regionball of

Georgiaball, that wants independence It has a population of 242,000 and has an area of 8,660 square kilometers.

Belgiumball think he will gonna try to cutting his hand, because he know that flashback of the Genocide.

He is of one of the sons of

SPQRball was the first to conquer him and when he died,

In 1008, Abkhaziaball became an independent and united all

In the 1990s, there was a horrible civil war between Abkhaziaball and

South Ossetiaball at war with

Russiaball recognized the two countries as independent but

Georgiaball didn't do the same.

Countries Voting Against the UN Resolution

Countries that have informal Diplomatic ties to Abkhaziaball 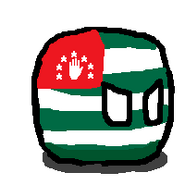 By u/Eesti_Stronk
Add a photo to this gallery

Retrieved from "https://polandball.fandom.com/wiki/Abkhaziaball?oldid=1348301"
Community content is available under CC-BY-SA unless otherwise noted.