AM BEST! AM CAPITAL, NOT YUO I SHOULD HAVINGS TALL TOWERS!

UAEball. Can into kebab and much tourism monies. He also has his own F1 circuit at the Yas Marina, which also is used in the final stage of the Abu Dhabi Tour cycling race. But, nowadays he is angry with

his father, this is because he is makings building in

his brother's clay instead of his clay.

Abu Dhabiball born in 1791. From them, he became a rich and powerful emirateball of 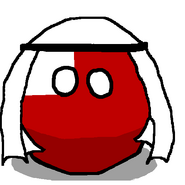 Retrieved from "https://polandball.fandom.com/wiki/Abu_Dhabiball?oldid=1291945"
Community content is available under CC-BY-SA unless otherwise noted.