Help Me from the Tsunami

Yuor Genocide did nothing Happend!!!.

Venezuelaball (For Saving His Live from 2004)

Enjoying life
Acehball is a province of

Indonesiaball. He used to be separatist until 2005 and he wants to became a

sultan Empire of Indonesiaball his dream want to Retake

Andaman and Nicobar Islandsball from

He can into special province of

Indonesiaball, because he can into Sharia law.

He is only provincesball in

Indonesiaball which he is a vodka puppets

1ball. Despite his strategic location he rarely into relevance when he was under

Sriwijayaball until the founding of Islamic

Samudera Pasai Sultanateball in ~13th century. At that era he was visited by both

Marco Polo who described that he was of rich clay.

Kingdom of Portugalball said that he is of turning eastern coast of Sumatra into kebab.

Samudera Pasai Sultanateball is succeeded by

Aceh Sultanateball in 1511, the same time

Aceh Sultanateball can into prosperous because he was world's largest black pepper exporter.

Netherlandsball did not do anything to

Netherlandsball said this was a "violation" and invaded Aceh, thereby started Aceh War the longest military campaign in

Aceh Sultanateball collapsed in 1874, but the war continued.

To help anschlussing Aceh, Snouck Hurgronje, a Netherlands scholar, visited Aceh in 1893 under disguise "Abdul Gaffar". He analyzed Aceh's condition at the time and after that, suggested

Netherlandsball to separate between chiefs and nobles (ulee balang) and religious scholars (ulama). This method became successful, because after that many Acehnese stopped fighting and many ulee balang joined

Netherlandsball's effort. Although instabilities and insurgencies continued until 1942.

Empire of Japanball arrived in Aceh in April 1942, and immediately met hundreds of revolts which only ended after they left in 1945. When

Indonesiaball declared independence, Aceh immediately joined, and many wealthy Acehnese who survived the war donated golds and airplanes for Republic's war effort. It must be noted that

Netherlandsball skipped Aceh during their operations to reclaim

In 1948, Soekarno, Indonesia's president, feeling indebted for Aceh's help, promised greater autonomy and permission to use Sharia law for Aceh. But he broke his promise in 1951 when Aceh merged into

North Sumatraball without any local Aceh leaders. Aceh declared himself part of rebel

Indonesiaball declared Aceh as its own province in 1956, the rebellion continued until 1962 when its leader Daud Beureueh surrendered.

In 1970s foreign companies began encroaching Aceh's new potential: oil. This alongside alleged unequal distribution of wealth because of

Indonesiaball's policies deemed unacceptable by Acehnese so they rebelled again, creating the

Indonesiaball than negotiate on international discussion. After that, in 2005 GAM's spokesman officialy declare GAM's dissolution.

Indonesiaball in 2006, this status allow Acehball to apply sharia law.

Today Acehball living in peace, eats Roti Cane as usual, and being a good kebab. He can into oil and tourist!. He also hates PUBG.

But for drawing the non-seperatist one is very difficult. 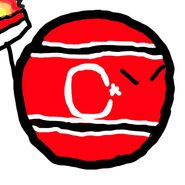 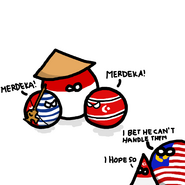 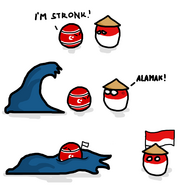 By u/fitzjordy
Add a photo to this gallery

Retrieved from "https://polandball.fandom.com/wiki/Acehball?oldid=1353029"
Community content is available under CC-BY-SA unless otherwise noted.