English and many others (cuz' immigrants)

almost made me landlocked and flag stealer 2

"Hey Spud! Give me some beer!"

Floridaball, they're almost landlocked. Can into Hillbilly/Redneck, as well as incest.

USAball is one of the states with the highest number of

Alabama Territoryball. He was admitted to the Union in 1819. In 1861, he, alongside his southern brothers seceded from USAball and formed

Confederateball. Alabamaball was fortunate to have the first Capital of Confederacyball, but it was taken by

Virginiaball. After The War of Northern Aggression The Civil War, USAball made Alabama and other southern states end slavery, teaching them why it is bad. Nonetheless, USAball is proud of Alabamaball for helping get him to the moon before the Commies. Unfortunately, Relations between Alabamaball and USAball has been strained after the Legalization of Homosexuality (which Alabamaball Hates) and USAball banning the Confederate Battle flag.

On December 12, 2017, everyone in USAball thought Alabamaball was a pedo-lover, with the Republican candidate running for the senate being suspected of molesting teenage girls. However, after the Democrat candidate won the senate seat, Alabamaball decided that he condemns child molesters. how ironic

(He Hates UK for That Episode of Top Gear) 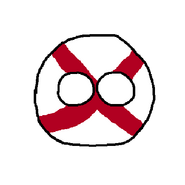 Retrieved from "https://polandball.fandom.com/wiki/Alabamaball?oldid=1265587"
Community content is available under CC-BY-SA unless otherwise noted.