Global warming, oil spills, that worm who stole his flag, not being independent, Earthquakes (can't Forget What Happened in 1964), The Murkowskis

salmon, Halibut, whatever he can hunt, forage, fish or trap in his clay

Became a 49th state in 1959, is also one of the most suicidal and sparsely populated states.

USAball. His flag depicts the big dipper and the north star (Polarisball). It was designed while it was a territoryball by a young

He has very dangerous roads and in there it seems to always winter. He still does not know if he wants to stay with his adoptive father (

USAball) or if he returns with his real father (

During the Cold War,

Alaskaball became paranoid. Because during the Cold War Alaskaball was surrounded by submarines of

USAball and submarines of the

Alaskaball was born around 17,000 years ago as an iced

1ball and was first colonized by

Alaskaball had no value to his name besides useless clay, and he was broke after the Crimean War and needed the money. USAball's purchase of Alaskaball was mocked being called "Seward's Folly". They were all was wrong, about 30 years later, gold was discovered on his clay, and there was a massive gold rush similar to

Alaskaball has gone through being a District, Department, and Territory.

Russiaball is unhappy with his decision.

Alaskaball. This may never happen..

Alaskaball has a considerable Orthodox minority thanks to

Russian colonization in the region. Several Russian missionaries converted many natives to the Orthodox Church, 12.5% of the Alaskaball's are Orthodox.

Alaskaball is the coldest state of

USAball. Also, the biggest, though

Texasball is in denial over it. You could split

Alaskaball into half and both halves would still be bigger than Texasball.

He currently is one of the greatest and coolest states of the Americas, he also invented Hidden Valley Ranch Dressing.

If you like, you can add a winter hat or glasses, or both of them, or have the North Star as an eyepatch (ala Serbiaball). 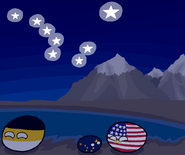 By u/ashinthesky
Add a photo to this gallery

Retrieved from "https://polandball.fandom.com/wiki/Alaskaball?oldid=1339228"
Community content is available under CC-BY-SA unless otherwise noted.