All I did was support Chinaball (formërly)

It's surrounding neighbours especially Serbiaball,1244 Resolution, London Treaty of 1913, Slavicballs (Except some exceptions), Turkics and other Mongoloid balls, when other balls call him kebab instead of kebab remuver, the theory of having his ancestry from Caucasus and not being Paleobalkanic who that is Fairy Take from Idiot Serbs, Earthquakes

Only an Albanian have BESA

I hope I join EU as fast as I can!
I can into Eurovision final again! Thankings yuo, Eugent Bushpepa!

That 6.4 Earthquake destroyed everything, people died.

Due to being in Europe and having an extremë distrust for

NATO, but cannot into

He never recorded his history because he was dumb illiterate until he came into contact with Ancient Greeceball whose alphabet he adopted and whose armor he used and ”modified“. His first official appearance was in the 4th century B.C. and the strongest tribe(Dardania) was often at war with

Macedonball and the Dalmatians were Pirates who often Pillaged the Italian Peninsula. In 229bc

Romeball wanted to stop the piracy done by the Illyrians and declared war on them to do so. Illyria was defeated and made into a province inside of

Roman Empireball. Illyria was overrun by Slavic invaders in the 6th century and pushed into Epirus Nova/Arbëria.

Illyriaball still managed to stay with

Byzantineball. The Illyrian tribes mixed with one another and thus formed what we now know as modern-day Albania.

After those events, Albania was a Principality 1190-1204 depending on

Byzantineball and was called the

Kingdom of Sicilyball decided to attack

Principality of Arbanonball from his clay.

Kingdom of Sicilyball did a comeback and attacks

Medieval Kingdom of Albaniaball got born. Then, in 1335, several Albanian principalities declared independence, including the Despotate of Artaball lead by the Albanian noble family Bue Shpata.

The principalities lasted until 1385-1386 until

Ottomanball set the attack again in South of Albaniaball, but still, Albaniaball defended itself. This was its first kebab removal of his, before Skanderbeg (his second founding father). In 1417, Despotate of Artaball was abolished forever, by

Ottomanball who also managed to take Central Albaniaball, and a year later, Albaniaball finally fell. Then, Albaniaball uprose in 1432-1433 with its leader, Gjergj Arianiti, and wins the freedom. This didn't last long. The

Albaniaball suffered 500 years of kebab pressure but he, even under

Ottomans divided Albaniaball in 2-3 Eyalets (provinces). In the beginnings of the 19th century, there were Albanian pashas commanding Albanian eyalets. The

Ottomans had a fear that they would rebel and declare themselves independent. The last Pasha, named Ali Tepelena was killed in 1826 by Sultans' servants. This was the end of Albanian pashas. In 1864-1912, Albaniaball was split into 4 eyalets (Manastir, Kosovo, Scutari, and Yanina eyalets).

1912, was the year of the beginning of the Balkans Wars.

Ottoman Empireball agreed since it was under attack from the 4

Orthodox morons. In 1913, Albaniaball was recognized by everyone, and

Austria-Hungaryball and the Central Powers Alliance showed sympathy to Albaniaball. And, with the plans of clay,

Austria-Hungaryball, apart from the other Superpowers, wanted Albaniaball to have its real borders. But then Entente made their final plan and put the different borders (which are now the present borders of Albaniaball). Poor Albaniaball was oppressed unfairly in North and South. In the North,

Montenegrins were killing Albanian civilians only to populate with their greedy population. In the South, the

Epirots to declare independence, but they were unrecognized. In 1914, Albaniaball becomes a principality under Prince Wied I. As World War I was about to begin, Prince Wied fled away from Albaniaball because of Albaniaball's civil war between Prince Wied's supporters and Pro Kebabs with Haxhi Qamil on the lead.

1918-1919 - The Entente as punished the Central Powers, decided to make Albaniaball a region of

Woodrow Wilson saves Albaniaball by telling to the Entente leaders that all small countries deserve to be free. In 1920, Albaniaball switches capital (because

Durrësball was being a pro-

Italian) and moves it to

Tiranaball. Between 1920 and 1925, Albaniaball becomes a principality under King Zog I. In the Revolution of 1924, Fan Noli tried to make Albaniaball more European, but failed and went to

Albanian Kingdomball and its Annexation

Albania becomes a kingdom under King Zog I. Zog I decided to do an alliance with Italy. And so, the country gets a heavy influence from Italy. Then, Galeaco Ciano met Zog and offered that Albania will be a puppet state under the protectorate of Italy. Zog refused, until Mussolini gave an ultimatum, that if Albania doesn't accept the offer it will suffer consequences. Still, Zog refused. And, then on 7 April of 1939 Albania was attacked by Italy and got annexed on 11 April. Then a delegation of fascists took the Albanian crown and gave to Victor Emmanuel III, The King of Italy.

Albania the Commie and the failed De-Kebabization

As Commies came to power, the first thing they did was: Removing the last part of their rivals by killing, persecuting, imprisoning them, and banning Islam. Between 1945 and 1948 Albania was allied with Yugoslavia. Yugoslavia in its agenda had its plan to annex Albania and be the 7th Yugo republic. But, the Soviet Union interfered and told Albania the truth about Yugoslavia. Then, Albania had a friendship with the Soviets and became a member of the Warsaw Pact in 1955. But, when the Soviet Union was lead by Nikita Khrushchev, Albania saw that this Soviet Union was too revisionist and not so Stalinist anymore. As Hungary got attacked by the revisionist Soviet Union, Albania made it clear that it will be no longer in that union. In 1967, it became atheist. As Albania left the Soviet Union, it made a friendship with China. Both had a ridiculous time since Mao wasn't interested in Stalinism anymore. In the 70's they had a cold friendship because China did deals with the USA (the capitalist pig) and accepted them. In 1976 after Mao's death, the friendship was too cold until 2 years later, they split. Then, Albania was the most isolated country in the world. After Hoxha's death, Albania was one of the poorest, most isolated countries in the world. People couldn't stay long as they filled a ship of emigrants (they were emigrants) and head to Italy. At the end of the '80s Albanian students protested and wanted democracy, as in 1990 the statue of Enver Hoxha was pulled down. Through the commie times, many great Bunkers were built. In the end, Communist Albania was nothing but the Balkan/Communist counterpart of the Mongol Empire while Enver Hoxha was the Genghis Khan.

Albania is a Republic country

In 1992 Albania becomes a Republic. In the first years of the Republic, Albania faces a difficult time on money and stuff. In 1997 Albania gets a civil war a clash between Socialists and Democrats. On 2 April 2009 becomes a part of NATO along with

Croatia. And in December 2010 Albania removes the visas. In 2014, Albania becomes an EU candidate state and in October 2019 after many delays get rejected again by

In November 2019, Albania got hit by a massive earthquake with over 6,4 magnitude which the Europeans didn't see coming. It hit many counties in Albania; 14 people died and over 600 people were injured. 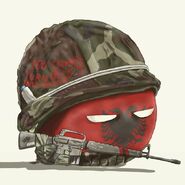 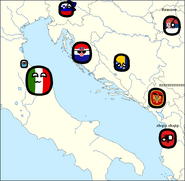 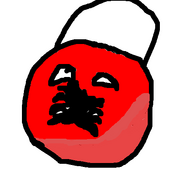 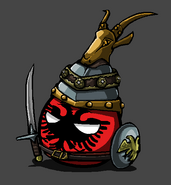 Add a photo to this gallery
Retrieved from "https://polandball.fandom.com/wiki/Albaniaball?oldid=1265557"
Community content is available under CC-BY-SA unless otherwise noted.