Yeah cause Oil powers up Ships! I hope I said that right lol

These according to Jurassic World Evolution

Has 3rd biggest Canadianball city, Calgaryball! DOWN WITH THE NDP

Albertaball is a Tyrannosaurid western province of

Canadaball. He is the fourth most populated Canadian province. His capital is

Edmontonball, though his most populous city is

Calgaryball. He also has no rats.

Albertaball has a lot of oil, and is highly wanted by

USAball for it. Because of his oil monies he is very rich and is hated by his fellow provinceballs because of it but it is okay because whenever he is sad, he just hugs an oil barrel and wipes his tears with his oil monies. He is also more conservative than his fellow provinceballs as evident in his no sale tax policy, hatred of his social democrat government and hatred of his fathers liberal government. Albertaball is also know for his reserves of natural gas, dinosaurs, and beautiful mountain views. Albertaball can into Olympics as well as the 1988 Winter Olympics was hosted in Calgary!

Albertaball was originally inhabited by 7ball tribes until settlers arrived in the 1600s and 1700s. When The Royal Proclamation was put in place in 1763 stating that the crown could only obtain land by doings treaties with 7ball tribe owners, Treaty 6, 7, and 8 were put into place a long while after. Later in September 1 of 1905, Albertaball became an official province of the Dominion of 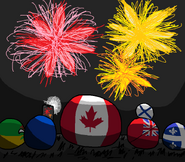 By u/DoodleRoar
Add a photo to this gallery

Retrieved from "https://polandball.fandom.com/wiki/Albertaball?oldid=1351069"
Community content is available under CC-BY-SA unless otherwise noted.