Taxes and policies implemented for Thirteen Coloniesball by UKball without the former's representation.

Thirteen Coloniesball becomes the clay of USAball.
The American Revolution is a conflict that happened when

UKball. It is known as the "

UK" or "American Relevance War" by

UKball colonized part of Northern America. The Eastern coast of North America was part of

Thirteen Coloniesball, which decided to become independent because of multiple taxes from

Since he knew that it was impossible to win,

Dutch Republicball. They all hated

UKball and was desiring an act of revenge against him. In the point of view of these countryballs this war was just a proxy war against Britain. They gave

USAball lots of guns and eventually they even sent their soldiers to help him, playing a huge part in the war.

After it was over, the Treaty of Paris was signed between

The Great Allies and the

USAball became fully independent and recognized... But he was just a weak, irrelevant and underveloped new independent countryball in a giant world, so

USAball started a long and hard journey to become the super power that he is today. 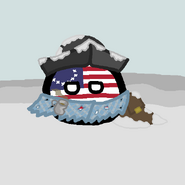 American Revolution Independence in a Nutshell
the amercan revoluteion independendendecdce in a nutshell
Add a photo to this gallery
Retrieved from "https://polandball.fandom.com/wiki/American_Revolution?oldid=1283324"
Community content is available under CC-BY-SA unless otherwise noted.