USAball located in the Pacific Ocean, south of the equator.

American Samoaball was born as a

United Kingdom of Netherlandsball discovered him, being part of the

USAball adopted him her with his her brothers. Disputes between the two Samoa's almost caused a massive naval conflict between

German Empireball however before any shots could be fired a massive typhoon struck the islands causing the warships of each side to be damaged and the impending battle to be resolved with an armistice. Nowadays, he's she's part of

USAball, with his independent friend

Samoaball. In 2001, he she became enemy with

Australiaball when he she defeated him in football (soccer) by 31-0.

If ever he she becomes independent (even if USAball granted him), he she would probably change his name to "Samoa La'oso", whereas "la'oso" means "the rising sun".

he she likes Michael Bloomberg. 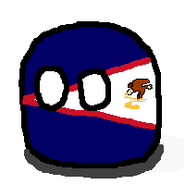