Achaemenid Empireball (at war on Athens)

THIS IS Spartaball, also known as Lacedaemonball, is a historical Greek countryball, famous for the Battle of Thermopylae and for kicking a Persian messenger down a hole.

Ancient Greeceball. He was weak and failed to kick

Persian asses during the Greco-Persian Wars.

Ancient Athensball. This resulted in the Peloponnesian War, in which

His descendant lives on as a small city in

He was in a movie, which spawned a stupid meme!  He was undefeatable(except very vunerable and easily defeatable) until he was defeated by Thebes because of one of their units of 150 homosexuals, who would kill the enemies to protect their loved ones. No joke. 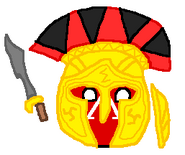 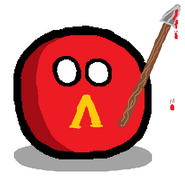 Retrieved from "https://polandball.fandom.com/wiki/Ancient_Spartaball?oldid=1279107"
Community content is available under CC-BY-SA unless otherwise noted.