Canadaball is sometimes seen battling a Canadian Goose, portrayed as a fierce goose. It often beats up Canadaball, yet he's the best one at handling it.

These animals are often seen dead. Next to Canadaball, holding a bloody wooden club. This is known as seal clubbing.

Australiaball is often seen with this animal. It is usually pecking on poor, little Australiaball. A great example is the Great Emu War.

This animal often appears near

Spainball can sometimes be seen with bulls. This is because of the famous 'Running of the Bulls'.

Despite only being in one comic, a rabbit has been seen with

Swedenball. This is because Swedenball has a sport known as 'Rabbit jumping'.

Mauritiusball can sometimes be seen with dodos since the dodos could only be found there, and the

Dutch ate them into extinction. He's been seen either mourning for them or killing them.

They are mostly seen around

New Zealandball, also known as the 'Sheep Shaggers'. They are sometimes seen doing more than just 'liking' the animals, which often tends to become sexual.

USAball is around. This is because the bald eagle is their national bird. USAball is usually seen protecting it, toting it around, or discussing how "epic" it is.

A snake was seen once in a comic where

Indiaball got bit by one.

These animals are often seen with

Tringapore say "Selamat Pagi" (Good morning in Malay), Philippinesball confuses it with "Thank You Stingray" as (Pagi is stingray in Tagalog).

Cayman Islandball's beaches are well known for their abundance of stingrays, giving them the nickname 'Stingray City'.

Seen only once in a comic with

USAball, who points a gun to the butterfly, which in the quote "Some say the flight of a butterfly can cause a hurricane in the other side of the world".

Seen in a comic with

Chinaball, in which Chinaball accidentally incinerates the poor creature into Siopao (Baozi). This is a based on a Filipino speculation that Siopao (or any other Chinese food sold in the streets) are made of cat meat, dog meat, rat meat, cardboard, or plastic. One comic about cats around the world, with

Japanball is always going about his kawaii cat costumes. In one comic he teaches

Germanyball about 'how to kawaii'.

A lion can sometimes be seen with

Ethiopiaball. Both countries can be seen with lions because both countries use lions as their national animal.

A giant cephalopod (Squid and Octopus) will sometimes appear with

Japanball. Japanball enjoys its presence and it will rape Japan with its tentacles and Japan will enjoy it.

A dog is seen in a comic with a

South Korean child, and sometimes a dead body of a dog is seen with

Vietnamball. Another dog can also be seen with a cat comic, which

Russiaball uses a dog instead of a cat.

A cow is once seen in a comic where

A pig is once seen in a comic where

Chinaball turns a cat into Baozi 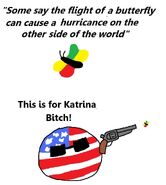 By u/iziyan
Add a photo to this gallery
Retrieved from "https://polandball.fandom.com/wiki/Animals?oldid=1359900"
Community content is available under CC-BY-SA unless otherwise noted.