Obama (I have a mountain named after him), the sun

People who dislike his flag, not being funny, hurricanes (especially Irma)

Recovering slowly from hurricanes.
Antigua and Barbudaball is a small island countryball located in the Caribbean. He is an important island in history but at the present time he is a tourist country that is not important that nobody attacks and few have importance, he is calm that aside from tourism also has fishing as a source of economy.

Antigua and Barbudaball, originally inhabited by

7ball, was firstly colonized by

British Antiguaball gained independence. In 2017, Antigua and Barbudaball's clay was devastated by Hurricane Irma, Barbuda was rendered uninhabitable. However, Barbuda's population rose again to 100 in 2018. 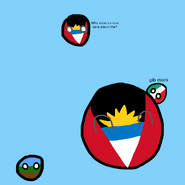 Retrieved from "https://polandball.fandom.com/wiki/Antigua_and_Barbudaball?oldid=1253549"
Community content is available under CC-BY-SA unless otherwise noted.