Hot and scalding. He is a Navajo that learned Spanish and English.

The enemies of his father

YOU ALMOST STOLE MY FLAG!

Yes, pays Floridaball and his father for it

Arizona drink, chimichangas (I of invented them), cactus fruit, blue corn (7balls invented it in my clay)

Choose Jon Kyl for U.S. Senate after the death of John McCain.

Finally can into weed.

Temperatures are getting hotter, especially in the summer. Chance of dying in a heat stroke in summer is FUCKING HIGH. Cannot decide if he is Republican or Democrat anymore after the 2020 elections.

USAball. Arizona is known for the Grand Canyon, dumb coyotes,

Its original inhabitants were the native

Spainballs conquered the region in the renaissance and the colonial era. It was later part of Mexicoball until after the Mexican-American War when Arizonaball was annexed by USAball.

Previously the Arizona Territoryball, Arizona was the last stateball in the lower 48 (the contiguous United States) states to achieve statehood (in 1912).

Hawaiiball were the last 2 stateballs to achieve statehood but are NOT in the lower 48.

Arizonaball sometimes gets mistaken for the country,

Macedoniaball when only its upper part is shown.

His senator John McCain wanted to be a president in 2008, but lost the election against Barack Obama. Eventually, he passed away in 2018 due to brain cancer.

Because of so much sun in Arizona, he cannot into Daylight Savings Time, as it would require him to waste energy for more. Hawaii also cannot into DST.

As of 2016, Arizona couldn't into weed yet (although Tucsonball supported it), but in 2020, he finally can.

Arizona is somehow related and friends with other stateballs. 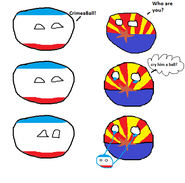 Retrieved from "https://polandball.fandom.com/wiki/Arizonaball?oldid=1318398"
Community content is available under CC-BY-SA unless otherwise noted.