Kebab, those trying to convert him to Catholicism

Deceased
Armenian Kingdom of Ciliciaball (or Kilikiaball) was a medieval Armenian offshoot Kingdomball, located in southern Anatolia along the Mediterranean sea.

Mamlukball, his biggest rival. Later, when

Mongol Empireball was invading the Middle East, he wisely made a deal with him instead of just being destroyed like every other countryball of the time, offering to team up against Mamlukball. This let him help the West Europeanballs establish relations with Chinaball. Unfortunately, the Mongols decided to convert to Islam and abandoned Ciliciaball, and later, Mamlukball was of killing of poor little Ciliciaball.

Despite all this, his enemy from the Crusades, Ayyubidball, was much friendlier to his because he wasn't that interested in his clay. However, still, they fought against each other.

Vaticanball was always trying to convert him into Catholicism, but he would have none of it, happy being Armenian Apostolic.

Was the last independent Armeniaball for quite a while, until 1918 with the 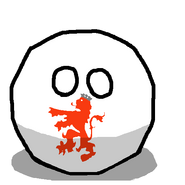 Retrieved from "https://polandball.fandom.com/wiki/Armenian_Kingdom_of_Ciliciaball?oldid=1304464"
Community content is available under CC-BY-SA unless otherwise noted.