Baseball, Gil Croes,The beach boys(thx for putting me into song!)

Alive
Arubaball is a countryball in the Carribean. He is a part of the

Arubaball's first inhabitants are thought to have been Caquetío Amerindians from the Arawak tribe, who migrated there from

Venezuelaball to escape attacks by the Caribs. Fragments of the earliest known Indian settlements date back to 1000 AD.

During the Napoleonic wars, the UKball took control over the island, between 1799 and 1802, and between 1804 and 1816, before handing it back to the Dutch

Tiny Arubaball has played an important role in World War II. When it came to production Lago was one of the biggest refineries in the world at that time. The fuel, refined at Lago, was used for the allied air force and that made the island a vital point in the Western Hemisphere: for the Americans to defend and for the Germans to attack. So torpedoes were fired at ships and at the Aruban coast. On the evening of May 10th, 180 French marines landed on Aruba to help with the defense of the island. In July of 1940, the French troops were relieved by English and Scottish troops. At the end of 1941, America got involved in the war and the entire Caribbean came under American supervision. In January of 1942, the first American soldiers arrived on Aruba. The Scottish then left again.

In 1976, he appointed a committee that chose the national flag and anthem, introducing them as symbols of Aruba's sovereignty and independence. In March 1977, the first Referendum for Self Determination was held with the support of the United Nations; 82% of the participants voted for independence. However, this koppelverkoop comes with a cost: Arubaball must leave eventually by the '90s. Arubaball doesn't want to be with Curacao control, nor want to be independent. After continuous negotiations, Arubaball is now a constituent country (Status Aparte) in the Kingdom of the Netherlands.

Aruba has one of the highest standards of living in the Caribbean region. There is a low unemployment rate. The GDP per capita for Aruba was estimated to be $28,924 in 2014; among the highest in the Caribbean and the Americas. Its main trading partners are Colombia, the United States, Venezuela, and the Netherlands breakdown of Aruba's economy by exports. The island's economy has been dominated by three main industries: tourism, aloe, and export; their coins are square for some reason. 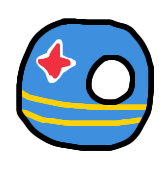 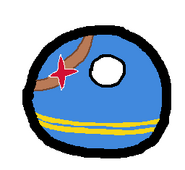 By u/Pacmantube
Add a photo to this gallery

Retrieved from "https://polandball.fandom.com/wiki/Arubaball?oldid=1351360"
Community content is available under CC-BY-SA unless otherwise noted.