Indiaball, but was claim by

Chinaball. He has a large Tibeto-Burman tribal population. 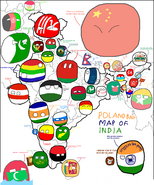 Retrieved from "https://polandball.fandom.com/wiki/Arunachal_Pradeshball?oldid=1344622"
Community content is available under CC-BY-SA unless otherwise noted.