Kind ball of clay, very caring but can into whip whip if angry. Ready to help, but is of Angry easily

Through Iraq and Syria, maybe

Very butchered. Lost all his clay. How he still can into alive is unknown. Is of

Assyriaball was the first powerful countryball ever. He emerged after the fall of Akkadianball, and at his peak ruled almost the entire Middle East. He conquered

Ancient Egyptball, Neo-Hittiteball, and even made it out as far as

Cyprusball. After his fall at the hands of Hordeballs from the north, his empire was killed by Kurdistanball's grandfather Mediaball. His descendants were ruled by various empires, and in more recent times have been sadly victimized by a dish called kebab. Later on, he converted to

Kurdistanball removed him at the same time as they did to

Armeniaball, and the two became friends even though Armenia's dad Urartuball was one of Assyriaball's biggest rivals.

During Ba'athist Iraqball times, Assyrians in the majority supported Saddam because he did no religious persecutions against them, however, Saddam did ban Assyrian languages in school but didn’t really had problems with they speaking it in home. Assyrians also liked Saddam because he protected old Iraqi culture although he did attempt to Arabize sometimes. However, after the

USA invasions and the fall of Saddam regime they began to be persecuted again by radical Islamists and Kurdish militants (though they were already being persecuted by Kurds since the formation of autonomous Iraqi Kurdistan).

ISISball in 2015, when ISIS destroyed Nimrudball and Ninevehball. If Assyriaball wasn't dead, it would summon the gods and suck out the genocidal spirits of jihadi savages, but Assyriaball watches as his children were unable to prevent the destruction of History. One day, Assyriaball may be revived, but not today. ISIS also keeps on killing innocent Assyrianballs because they are Christian.

There is of problems with

Kurdistanball, they complain a lot about Barzani tyranny. But they try to get along at least somewhat. They still try to push one another. But they still focus on work. Like middle eastern

Germans. But hairier. Both are much hairier. And fewer blondes, and their weird languages.

Regardless other balls still want them to try to get along, and this will take a lot of wörk.

Iraqball are his sons apparently, and he works with them against

ISISball to save their land.

Syriaball and Assyriaball get along greatly. He loves that his daughter is just as stronk as he was in the past and that the fighting spirit runs in Syria! Oh yeah, and Iraq too.

My of favourite Cigarette brand is of the Persian Sun... ah.l can Of the tasting the genocide denial.

The Of beauty of the picture, is of to leave to peoplenayas’ interpreting. -Ashur Bet Ball 2020 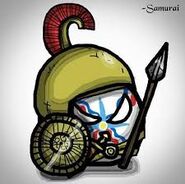 Retrieved from "https://polandball.fandom.com/wiki/Assyriaball?oldid=1298396"
Community content is available under CC-BY-SA unless otherwise noted.