Rain Rain
Azoresball is one of

Portugalball's autonomous archipelago, along with

Ancient Greeceball probably may have discovered the Azoresball before Portugalball discovered it, but it's very unlikely and never confirmed. Someone thinks that he is Atlantisball. Only in 1427 Kingdom of Portugalball discovered and adopted him. The name "Açores" came from the birds around the islands which the Portuguese navigators thought were Azores when they saw them. The birds were actually "milhafres" and the Azoresball would be called Milhafresball if the Portuguese navigators took more attention!

If becoming independent, the Azores would be the world's first tri-continental country.

Azoresball is almost simple to draw: 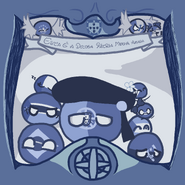 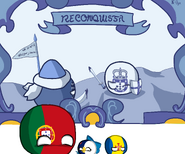 Retrieved from "https://polandball.fandom.com/wiki/Azoresball?oldid=1319031"
Community content is available under CC-BY-SA unless otherwise noted.