Germanyball. A common shorting for Baden-Württemberg is BW.

Baden-Württembergball was born as a

He was an independent countryball of

Baden-Württembergball is located in southern Germanyball and it is the southernmost German stateball together with Bavaria. Its inner-german neighboures are

Hesseball. Traditionally Baden-Württemberg is the founder of many gut food like Späzle or the Schwarzwälder-Kirschtorte. They build gut cars/buses as well like Mercedes-Benz, Porsche or Neoplan. Within Baden-Württemberg there are the unique Mountain-Ranges Schwarzwald (Black-Forest) and Schwäbische Alb (Swabian Alb). The biggest cities in BW are Stuttgart, Ulm, Mannheim, Heidelberg, Karlsruhe, Freiburg im Breisgau, Heilbronn, Pforzheim and Baden-Baden. BW's capital is Stuttgart. Freiburg i.B. is the warmest and one of the southernmost bigger cities in Germany. Baden-Württemberg shares its borders with

Switzerlandball. This is one of many reasons why the Swiss come along with Baden-Württembergians most.

In contrast to Bavaria BW mostly likes the other states of Germany but especially the states of Rhineland-Palatinateball, Bavariaball and Hesseball. His traditions are different than the traditions in the northern states but he can except it and doesn't care about when someone can't understand his culture. When it comes to food and technology BW is completely in his element. He Formely had a medical degree 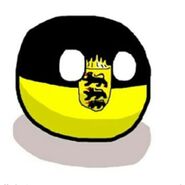 Retrieved from "https://polandball.fandom.com/wiki/Baden-Württembergball?oldid=1292982"
Community content is available under CC-BY-SA unless otherwise noted.