Iraqball. He likes to call himself the cityball of peace, but has had trouble getting into peace lately. He is the most intelligent of all of the other Arab cityballs and contributed the most to Arab society with his knowledge in philosophy, science and mathematics. He even managed to influence cityballs in Europe after the Crusades and Umayyadball's conquest of Spainball. 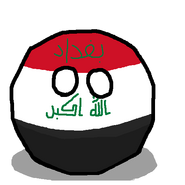 Retrieved from "https://polandball.fandom.com/wiki/Baghdadball?oldid=1296914"
Community content is available under CC-BY-SA unless otherwise noted.