Azerbaijanball. He is the lowest capital cityball in the world, even flatter than

Can into hosting Eurovision (he built a brand-new entertainment venue, the Crystal Hall, just for the occasion) and European Olympics. Wants Europe to notice him, but gets mad when they notice his negative sides. 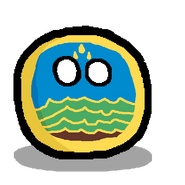 Retrieved from "https://polandball.fandom.com/wiki/Bakuball?oldid=1310746"
Community content is available under CC-BY-SA unless otherwise noted.