No. Also cannot into relevance.
Beninball is a countryball in Western Africa. He can rarely into relevance. He speaks French since his adoptive mother was Franceball.

He is a member of the West Africans family. He is also not to be of confused with the Benin Empireball

Beninball is a descendant of West African 8balls, and he is the son of Dahomeyball, and in 1892, Franceball killed his father and forcefully adopted him. He spent the next 68 years known as French Dahomeyball until he was given independence in 1960, whereupon he became known as Beninball. He is currently suffering from a recent Ebola outbreak in his neighborhood, but still cannot into much relevance. 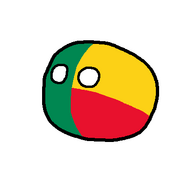 Retrieved from "https://polandball.fandom.com/wiki/Beninball?oldid=1251935"
Community content is available under CC-BY-SA unless otherwise noted.