We can into triangles!

Bermudatriangle is an Illuminati flat triangular countryball. He's a dependency of

UKball and he's friend with

Alienballs. It is located east of

7triangle, despite the fact the island had no people at that time. He was discovered by

UKball got caught in a hurricane as a colony of

Kingdom of Englandball. He was part of Colony of Virginiaball until 1614, the triangle itself took over in 1615. Following unification in 1707, he became a crown colony. In 1949, Bermuda became the oldest colony and most dependent territory. After 1997, and finally, in 2002, he became an overseas territory.

Drawing Bermudatriangle is not very simple: 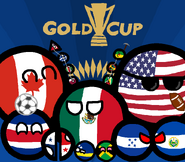 By u/Valcyor (In ball form)