Anyone who says Betelgeuse's name 3 times

Likes to anschluss everyone who said his name three times

Ready to die and be brighter than Moonball
Betelgeuseball is a red supergiant star in the constellation of Orion. He is very old, near the end of his life. His light takes around 642 years to reach

Earthball. It is said that when he blows up, he will be brighter than

Moonball in the sky. Saying his name three times makes him appear. If he blew up,

Earthball could be annihilated by the gamma ray bursts emitted by the explosion, which are the second biggest explosion in the universe after the Big Bang, and turned into a wasteland only populated by insects. It's said explosions of other stars have killed off

alien civilizations in the past and will kill

Earthball's in the future. A star like him has already done the deed 450 million years ago, killing off 2/3 of all life. Betelgeuse is currently brightening up it's clay again and is still easily visible in the sky. If he were to anschluss replace the

Sunball, he would be as large as Jupiter's orbit. 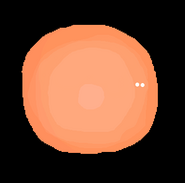 Who said my name three times?!
Add a photo to this gallery

Retrieved from "https://polandball.fandom.com/wiki/Betelgeuseball?oldid=1204489"
Community content is available under CC-BY-SA unless otherwise noted.