Ice
Bouvet Islandball (sometimes known as Bouvetoyaball) is a dependency of

Norwayball. It is the most remote island in the world, located somewhere in between

Antarcticaball. Being permanently covered in ice, its clay is uninhabited and is only home to seals and a weather station.

Bouvet Islandball was first spotted in 1739 by

Franceball but only recorded in 1808 by

UKball, although its clay was not set foot on until 1822 by an

UKball officially laid claim to its clay, naming it Liverpool Islandball. However, in 1927,

Norwayball made the first temporary settlement on it while claiming the clay as its own. While

UKball first protested, hazy data from its last expedition and the unimportance of the island made

Bouvet Islandball became a natural reserve as of 1971. 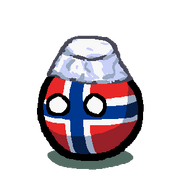 Retrieved from "https://polandball.fandom.com/wiki/Bouvet_Islandball?oldid=1168591"
Community content is available under CC-BY-SA unless otherwise noted.