Tourists, not having MON INDEPENDANCE!!!

6ball!!! I am trying to back into space like my other alien brethren stranded here on this rock!!!

Still trying to get Franceball to GIB MON INDEPENDANCE!!

gib independence
Brittanyball also known as Bretagneball or Breizhball, refers to itself as Breizh (Bretagne in Breton language), is a

6ball in disguise black and white version of the

Franceball as one of its provinces. Brittannyball is also the brother of its evil twin,

After SPQRball fell, many Britonballs settled Brittanyball in the 5th century. Brittanyball was finally consolidated in the 840s under Nominal in resistance to

Brittanyball was heavily attacked by the

Vikingball at the beginning of the 10th century. The kingdom lost its eastern territories.

The Bretonball War of Succession, resulted in a short period of total independence. However, Brittanyball lost the Mad War against

Franceball in 1488, mostly because of its internal divisions.

After the Mad War, Brittanyball married

In 1956, Brittany was legally reconstituted, however losing the territory of Nantesball, its more Latin province. Today, Brittanyball retains its cultural singularities. 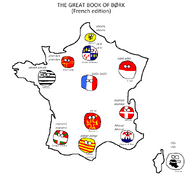 Retrieved from "https://polandball.fandom.com/wiki/Brittanyball?oldid=1347315"
Community content is available under CC-BY-SA unless otherwise noted.