Le Grand Départ was wonderful, did vous enjoy the party?
Brusselsball sprouts is the capital of

Belgiumball. Brusselsball is one of the busiest cityballs, as he is also the headquarters of NATOball and EUball. He speaks French predominantly albeit officially a bilingual city (co-official with the Dutch language). He is the capital of the Merkelreich EURO.

He is the Belgian Capital, Region and province. 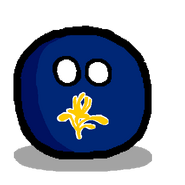 Retrieved from "https://polandball.fandom.com/wiki/Brusselsball?oldid=1322867"
Community content is available under CC-BY-SA unless otherwise noted.