Street dogs and their sh*t!

Himself (Steaua vs. Dinamo)

Street dogs, Ceaușescu (he destroyed many beautiful buildings for his shitty commie flats),

Inflation, probleme, corruption, of much protest...
Bucharestball is the capital of

Romaniaball, being an enclave of

Ilfovball. He is also known for being called Le Petit Paris.

Draw Bucharestball is simple (except for coat of arms): 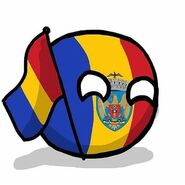 Retrieved from "https://polandball.fandom.com/wiki/Bucharestball?oldid=1284449"
Community content is available under CC-BY-SA unless otherwise noted.