I am not a Traitor!!

Macron (for insulting us)

Coups(especially the 1987 one), Macron, Blaise Compaoré

Cannot into sea
Burkina Fasoball is a landlocked countryball in West Africa.

Beninball to the south, and

It is very poor, has AIDS, and, along with a lot of other African countries, has issues with hunger. Despite this, it is one of the least corrupt countryballs in Africa. Stronk.

His capital can into funny name.

Franceball adopted him in 1896 when it became part of

French West Africaball. The territory now known as Burkina Fasoball was granted higher autonomy in the form of

French Upper Voltaball later in 1919. The name comes from its location up of the Volta river.

In 1958, it gained self-governance before becoming fully independent in 1960 under the name of the

Thomas Sankara came to power in a coup and would rename the country to Burkina Faso in 1984.
Sankara would make Burkina Faso self-sufficient and create a food surplus, vaccinate 2 million Burkinabé in order to combat measles, meningitis, and polio, combat deforestation, and distribute land to the peasants. In 1987, Sankara would be killed in a coup.

The countryball has since been the victim of multiple coups d'état, one of which led to its renaming to

Burkina Fasoball in 1984. The latest coup was in 2015 which ousted Blaise Compaoré. 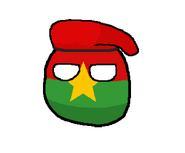 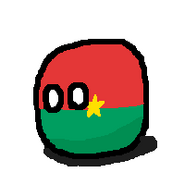 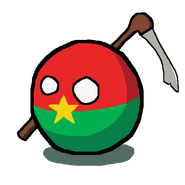 Retrieved from "https://polandball.fandom.com/wiki/Burkina_Fasoball?oldid=1283919"
Community content is available under CC-BY-SA unless otherwise noted.