Now i dont recognize this country anymore (From 2018)

F*ck you for giving sanctions

F*ck you for betraying me

Can barely into relevance and peace
Burundiball, officially the Republic of Burundiball (Kirundi: Republika y'Uburundi; French: République du Burundiballe), is a landlocked countryball in the African Great Lakes region of East Africa (and sometimes Central Africa), neighbored by

Tanzaniaball to the east and south, and the

Democratic Republic of Congoball to the west. He is a descendant of the

Bantuballs. Due to political unrest, overpopulation, high poverty rate, disasters and government unstability, he is currently one of the poorest countries in the world along with

Rwandaball, Burundi was an independent kingdom until the beginning of the twentieth century, when

colonized both him and

Rwandaball. After the First World War and Germany's defeat, the colony was ceded to

Belgiumball, creating the colony known as

Belgiumball in 1962, he initially had a monarchy, but a series of assassinations, coups, and a general climate of regional instability culminated in the establishment of a republic and one-party state in 1966. Bouts of ethnic cleansing and ultimately two civil wars and genocides during the 1970s and again in the 1990s left the country undeveloped and its population as one of the world's poorest. Additionally, he underwent another coup in 2015. Most of his conflicts largely revolved between the rivaling Hutu and Tutsi populations.

Since 2015, however, his relations with

Rwandaball have been going wrong, as well severely sore relations with the west, which has caused his foreign policy to change drastically. in 2018, Burundi moved to the capital Gitega. 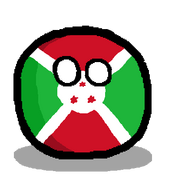 Retrieved from "https://polandball.fandom.com/wiki/Burundiball?oldid=1282927"
Community content is available under CC-BY-SA unless otherwise noted.