Busanball is also the second most populated city in

South Korea. Busanball is a city primarily for leisure and tourism, while

Seoulball is a city primarily for Governmental work and tourism.

In 757, the name Dongnaeball was chosen for the cityball's name.

In 1963, Busan was independent out of Gyeongsangnam-doball, which is a province in South Koreaball, and started the Busan Metropolitan City.

South Koreaball- My mommy. Likes me and like my beaches!

USAball- My mom's ally. Because he and mom are best friends I grew up calling him "uncle America." He has military bases in my clay and he loves me and my beaches

Daeguball- brother, nice guy and he's hot in the summer.

Ulsanball- brother, BFF 4 EVER i guess??

Daejeonball- brother, one of the brother who had expo.

Gyeongsangnam-doball- Big brother, have my friends Gimhaeball and others there.

North Koreaball- evil Uncle, tries to nuke me even if nuke don't come to me. UNCLE AMERICA WILL REMOVE YUO! 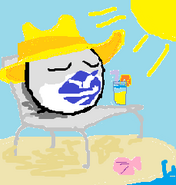 'Haeundae is of 최고 beach in 부산'

Retrieved from "https://polandball.fandom.com/wiki/Busanball?oldid=1293470"
Community content is available under CC-BY-SA unless otherwise noted.