Stampede pancake breakfast, ginger beef, whatever he finds in the trash bins in the alley

Cannot into 2026 Olympics, but can into Grey Cup win! Way to go Stampeders!

Canadaball. Often reffered to as the "Conservative Capital of Canada", he is probably the most right wing major cityball in the countryball; he is very hipster in spite of what he calls himself. Most people who live here consider him to be the capital of

Edmontonball. In 1991, he had a large hailstorm; and in 2005 and 2013, he had large floods that in total killed around 19 people, and displaced even more. The person who designed

Calgaryball has about 1,300,000 people, making him the most populous cityball in

Albertaball. He loves anything that has to do with the Stampede. It has also hosted the 1988 Winter Olympics, which created a lasting legacy for the city as many Canadian athletes use the Olympic Park facilities as a training base. He is also very proud of his hockey and football teams, the Flames and the Stampeders. He is named after Calgaryball (Scotland) when

Scotlandball came over, he decided to name it after him. He started as an RCMP fort called Fort Calgary where he gained the trust of native

Calgaryball is also one of the cleanest & livable cityballs in the world... Well... kind of. The lay-offs are getting really bad, so he's been living in a trashcan lately. He is also sometimes a very talented dainty dancer at the Albertaball school of ballet. His roads are plagued with unending road construction, as a result, he has C-Trains for public transit. He does have a bit of crime. 8 users on the

Polandball Wiki are from Calgary. 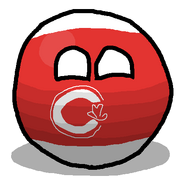 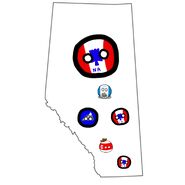 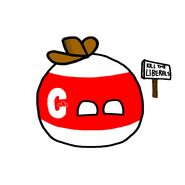 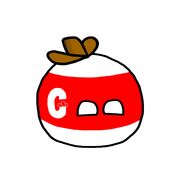 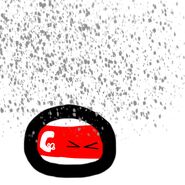 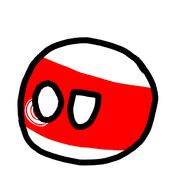 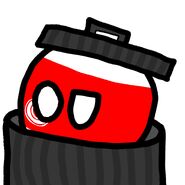 Retrieved from "https://polandball.fandom.com/wiki/Calgaryball?oldid=1293391"
Community content is available under CC-BY-SA unless otherwise noted.