Cameroonball is a countryball in Central Africa. He is known to be "Minimized Africa" because he has sea, mountains, tropical forests, and Sahel deserts in the North. His surname is Diaz.

8ball and after this, a

German Empireball "discovered" and adopted him in 1884. When they lost in WWI,

Franceball's government, while the western parts of him went to the UKball.

Cameroonball is an independent African countryball since 1960, with the southern British Cameroonsballs joining him the next year. He has had the same leader since 1982.

Cameroonball is simple to draw: 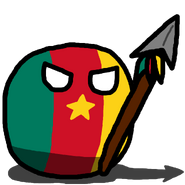 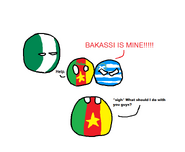 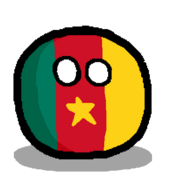 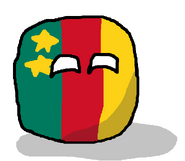 Add a photo to this gallery
Retrieved from "https://polandball.fandom.com/wiki/Cameroonball?oldid=1264468"
Community content is available under CC-BY-SA unless otherwise noted.