Italiaball, be irrelevant, be called retarded, somebody don´t talk good about "tierruca".

Si. If Spain can into space, he can too!

Try to be interesting someday.

Cantabria is an autonomous community of

He´s so proud of himself, because of his culture, but nobody cares him because Basqueball is more interesting than him (He even hurted him sometimes with ETA) . He likes cows, but everybody looks Asturiasball when that´s the conversation interest. He got famous writers like Jose María de Pereda, but when books are important, everybody looks Castile and Leónball. The interesting thing is that, Cantabria doesn´t care about this, because he is happy. He can do so many things, and he don´t care about what other comunnities think (but he sometimes want more relevantie from dark ways)

He likes hiking, fishing, swimming, be at the camp, eat and drink products of his "tierruca", look after his cows,goats, chickens, horses..., see cantabrian wars acting, talk with Asturiasball...

He think that south spain are a bunch of monkeys because one time he confused they with monkeys.

He likes so much the traditions and the parties. He sometimes dress like a person of 19 century in the mountains. He play so much the ravel and, for being a little countryball, have a strong voice for the mountain singing,

First appear of Cantabriaball was when appeares the tribe of Cantabriball in north of the Iberian Peninsula. When SPQRball wanted to conquer Spain and f̶i̶n̶i̶s̶h̶e̶d̶ ̶w̶i̶t̶h̶ ̶t̶h̶e̶ ̶f̶u̶l̶l̶y̶ ̶g̶a̶y̶ ̶t̶r̶i̶b̶e̶ ̶o̶f̶ ̶t̶h̶e̶ ̶I̶b̶e̶r̶i̶a̶n̶s̶ dominated the South, he went to the north and founded Cantabrians, who f̶u̶c̶k̶e̶d̶ ̶h̶i̶m̶ ̶u̶p̶ resisted to him for 20 years before being invaded. The Cantabrians never accepted SPQRball culture, so when this one was abused by germanic tribes and killed, Cantabrians returned to be the coolest in Europe with the company of g̶a̶y̶ basque.

When Visigothic Kingdomball arrived, Cantabrians kicked his ass because they were fucking tired of invaders. Then, visigoths used his gay power to end Cantabriaball defenses. When they ended that power (that didn´t made nothing), they were so bad, so Al-andalusball enter to fuck more the situation. They killed visgoths but they were so distracted giving a lesson to this guy, that forgotten Cantabrians and (not so much) Asturians. Then, Asturiasball made a kingdom where, they didn´t said nothing about Cantabrians and make Asturias be the hero. Then Castile added Cantabriaball to his territory. Why? Because YES.

Centurys later, Cantabria (called Santander) still being Castilia slave. In the Spanish Civil War, Francoist Spainball fucked up Cantabriaball, because Castilia runned away with Fascoist Spain with all Cantabrian Weapons. Naziball and Kingdom of Italyball fucked more Cantabria and this one ended fully destroyed.

Years later, Cantabria was tired of all of that shit to not being named or used or liked or be famous or be called retarded, so he get separed of Castilia (finally) and get autonomy. Today he stills being irrelevant and hate it, with all of his history of fights and loses.

How to draw it 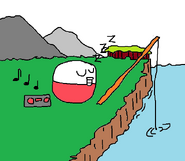 Retrieved from "https://polandball.fandom.com/wiki/Cantabriaball?oldid=1352827"
Community content is available under CC-BY-SA unless otherwise noted.