Absolute Monarchy (until 480 BC)

SPQRball. He is son of

Phoenicianball and is located in modern-day

Carthageball was once a stronk civilisation in what now called

Tunisiaball. Carthageball was very famous for havings war elephants and Hanniball who was a stronk general and almost removed the

Romans (Carthage's biggest enemy). But unfortunately Romans got greedy and removed Carthage forever, anschlussing its former clay. Now all lies of Carthage is just of ruins.

Carthage is a average guy, although he got made fun of

SPQRball for being "inferior" and really "retarded for trying to invade my clay". He worshiped cooler gods, unlike the Romans, who copied the Greeks (envy much). He also had a superior navy and made everyone envy him and then laugh at them. Also, he got bullied (even by his peers), for being accused of child sacrifices. Weird flag.

While Carthage is lonely he still has friends he likes and loves:

Enemies (to be removed) 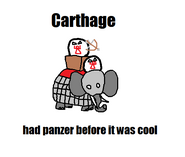 Retrieved from "https://polandball.fandom.com/wiki/Carthageball?oldid=1289647"
Community content is available under CC-BY-SA unless otherwise noted.