All islands have the same flag
Gayman Cayman Islandsball is a British overseas territoryball in the Caribbean Sea. It is located southwest of

Cubaball. His beaches are known for their stingrays. Many corrupt leadees place their bank account savings in his clay.

He was recently featured in the video game Call of Duty: Black Ops II in where he has a floating city/shopping mall/resort called Colossus, where the world's 1% live.

Cayman Islandsball were a pirate 3ball discovered by Spanish Empireball in 1503.

Nowadays, he's a British dependency since 1670.

In 1937, a hurricane killed over 111 people destroy most buildings on the island. To this day, it still remains one of the most popular sights in the Caribbean.

Cayman Islandsball is based on the British Blue Ensign 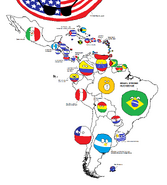 By u/raispartam
Add a photo to this gallery
Retrieved from "https://polandball.fandom.com/wiki/Cayman_Islandsball?oldid=1283719"
Community content is available under CC-BY-SA unless otherwise noted.