CREATOR OF ALL EVIL KEBABS

EVIL KEBAB WHO WOULD NOT GIB INDEPENDENCE TO MY FRIEND!!! (until 2020)

Same with Morroco..lol you HDI though

ANOTHER WORST KEBAB THAT MAKES FUN OF ARMENIA AND ARTSAKH

Muslims, Empire, Anti Balaka (not much)

Maybe? But can into road

Africa and the world (

CARball in the latter two). Its HDI is 0.352 as of 2016. Central African Republicball can into being a car, because of his abbreviation, CAR.

CARball is a descendant of the

Bantuball. He gained freedom from his mother and colonist,

Franceball, back in 1960 when all other African countries were doing it. Surprisingly,

South Koreaball (9/5/1963) are the first Asian countryballs to recognize the CAR. Sadly, the Central African Republicball cannot into lasting a day or two without a coup or a war. He lives in extreme poverty and half of this population is dependent on foreign aid. He currently has a civil war.

Draw CARball is as follows: 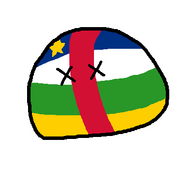 Retrieved from "https://polandball.fandom.com/wiki/Central_African_Republicball?oldid=1261000"
Community content is available under CC-BY-SA unless otherwise noted.