Trying to stay out of trouble but friendly

Thanks for founding coffee, my economy would be bad without it

Worst than Pinoy wants to remove the drug lords

Maybe, but I have my own space agency

Thank you Egan Bernal, the first rider from my country to win the Tour de France!

Colombiaball, also known as Cocainelandball, officially the Republic of Colombiaball, is a countryball located in north-west South America. Its clay borders

Peruball to the South, and

Panamaball to the West. The country is divided into 32 departments, including the capital

Bogotáball which acts as it's own separate department, giving it a total area of 440,831 square miles, making it the 25th largest country in the world. As of 2018, it has a population of 49.46 million inhabitants.

Being a Spanish Speaking country in western South America already gives Colombia the advantage to join,

UNASURball, as well as being a

UN member like almost any other country. It also maintains good relations with

USAball with taking care of

Colombia is often seen as that one neighbor in Latin America who always tries to be nice and develop, but always gets into conflicts, especially with his sibling Venezuela. It is currently dealing with drug wars, skirmishes, and now a refugee crisis due to the large amounts of Venezuelans fleeing the country. Despite all these problems, it still tries to move forward with developing and defense, which makes it both a middle and regional power in the Americas. Some say he may be an emerging power (Not a potential superpower).

Its national day is July 20th, and its astrological sign is Cancer. 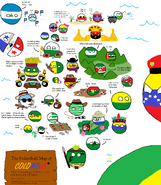 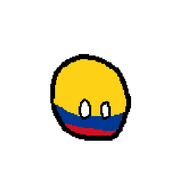 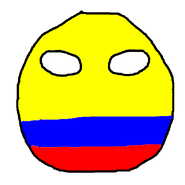 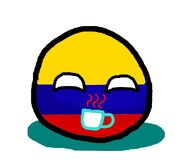 Add a photo to this gallery
Retrieved from "https://polandball.fandom.com/wiki/Colombiaball?oldid=1265612"
Community content is available under CC-BY-SA unless otherwise noted.