King of the Hill (mostly)

thank you for sending flowers to Matt and Trey (mostly)

Another drug remover and immigrant

HOW DARE YOU BAN SOUTH PARK

Oregonball, he likes to smoke weed. He has lots of snowy mountains.

Coloradoball likes to hike on them as well and put rocks on them. His state is where TV show South Park takes place. He also has the lowest obesity rate in USAball.

Spanish Empireball in the 16th century as part of the provinces of Alta California and Nueva Mexico.

Colorado has a 2.9% income tax and 4.6% state sales tax. He cannot into raising taxes unless the raise is approved by the state voters. 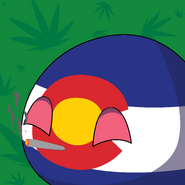 Retrieved from "https://polandball.fandom.com/wiki/Coloradoball?oldid=1303215"
Community content is available under CC-BY-SA unless otherwise noted.