USAball, and is sometimes referred to as the constitution state. His largest city is Bridgeportball. He is partly

New Yorkball). He has a total population of 3.4 million. He is also commonly known for being poor, but he somehow is the fifth richest state in USAball. He has the second highest sales and income tax also. He can into many potholes.

He was born as part of

13 colonies. Then the 13 colonies became independent from UKball as USAball, later Connecticutball became the fifth state of USAball in January 9, 1788 after ratifying the Constitution. 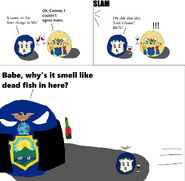 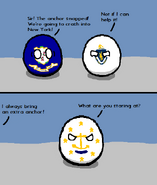 Retrieved from "https://polandball.fandom.com/wiki/Connecticutball?oldid=1286748"
Community content is available under CC-BY-SA unless otherwise noted.