No, but can into kitchen.

In the kitchen cooking dinner

New Zealandball's sons, along with

Niueball. He enjoys cooking and the beach. He even runs his own cooking show called Cooking with Cook.

Within the Realm of New Zealand, he is a state in free association, just like

It is a coincidence not that Cook Islandball is the third fattest countryball in the world. 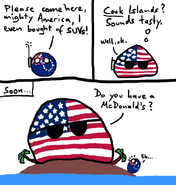 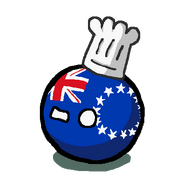 Add a photo to this gallery
Retrieved from "https://polandball.fandom.com/wiki/Cook_Islandsball?oldid=1278095"
Community content is available under CC-BY-SA unless otherwise noted.