Thank you for Recognizing the Referendum

Dudes That Recognize me as a part of Russia

NON OF YOUR BUSINESS

and all those who voted to call

Russiaball an occupier of me

Yes, thanks to Russia!

Ukraineball and annexed him (Even though he promised not to, when Ukraineball gave Russiaball all his nukes back). Crimeaball is making good relationships with countryballs around him, albeit a de facto part of

Russiaball. In some ways it seems Crimeaball isn't too fond of Russiaball either, but nevertheless, joined anyway. This would explain why Crimeaball at first tried to be its own countryball.

Countries that recognise Crimea as part of Russia

Countries Voting Against Crimea being Ukraine

Countries who recognize Crimea as a part of Ukraine 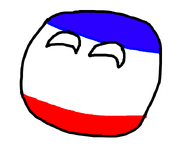 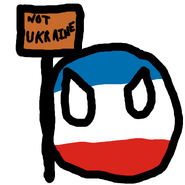 Retrieved from "https://polandball.fandom.com/wiki/Crimeaball?oldid=1263585"
Community content is available under CC-BY-SA unless otherwise noted.