Ongoing
The Crisis in Venezuela is a socioeconomic and political crisis that Venezuela has had since Hugo Chávez's tenure and which extended over the years into the current presidency of Nicolás Maduro. It is considered to be one of the worst economic crisis' in the world, being worse than the Great Depression or The fall of communism. 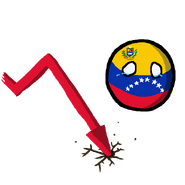 Retrieved from "https://polandball.fandom.com/wiki/Crisis_in_Venezuela?oldid=1280906"
Community content is available under CC-BY-SA unless otherwise noted.