USAball (possibly when under Biden administration)

Why you a USA puppet now! (Complicated Historical Relationship)

THE WORST ADOPTIVE DADDY EVER!!!!!!!! (during Trump administration)

On vacation ,Still living the socialist life. Got a New President and ended the Castro Era.

Cubaball, officially the People's Republic of Cubaball, is a cube countryball in the Caribbean islands. The country is divided into 15 provinces, and 1 Special Municipality, including his capital

Havanaball, giving it a total area of 42,426 square miles, making him the largest country in the Caribbean. With a population of 11.22 million as of 2017, Cuba ranks 80 in the most populous countries in the world.

Since his revolution, Cuba has been suspended from

OASball due to making links with

Soviet Unionball. However, it does maintain membership in

UNball like almost every other nation in the world, and is a founding member of

Much like other socialist/communistballs, it does not do so well in regards to political or economic freedom. However,

Cubaball can into having a high human development index, unlike his fellow counterparts. Despite the trade embargo placed on him by

USAball, it has done well in regards to education and health - even becoming the first to eradicate mother to child transmission of HIV and syphilis in 2015.

Spainball, or July 26, when it had his revolution.

The most popular way to represent Cubaball is with the countryball using a cigar and a military cap, which would be a reference to the late Fidel Castro, the country's former president.

Cubaball was a colony of

Spainball, his mother until 1902 when

USAball decided he didn't like Spainball growing sugar cane near his clay. So

Cuba and made him a puppet to support capitalist American ideals. Then in 1959, he said capitalism was bad and said "FUCK CAPITALISM" and moved out of

Shortly afterward, USAball started feeling wrong in the head when he went to Cubaball's clay, so he then said that Cuba is somehow damaging his brain with special technology, and now they are enemies again. Canadaball, despite being friends with Cuba for a long time, later said he had the same problem. Now, thanks to some science fiction, Cuba's only friends are the Bolivarian Alliance for the Americas, but many countries in said alliance are as troubled as him. Cubaball is also very sad over Fidel Castro's passing in 2016.

The flag of Cuba has five stripes each alternating between blue and white and a red equilateral triangle on the left side with a five-pointed star. Some might argue that Cuba's flag was inspired by

USAball's flag, but others believe it to be an idea from Narciso López, one of the main liberators of Cuba from Spain.

The blue stripes refer to the 3 old divisions of the island, the two white stripes represent strength and purity of ideas, and the red triangle stands for equality, fraternity, and freedom, as well as the blood of those who fought in the wars. 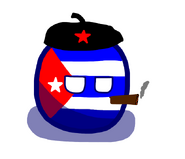 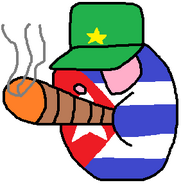 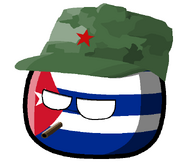 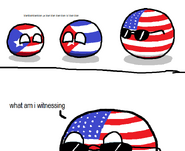 by u/il0vegaming123456
Add a photo to this gallery

Retrieved from "https://polandball.fandom.com/wiki/Cubaball?oldid=1261375"
Community content is available under CC-BY-SA unless otherwise noted.