Ambushing from the mountains, driving cars ,using Falx, GOLD AND MORE GOLD, Burebista, Decebalus, beeing an empire, SPQR giving him tribute, James May Being our only Fanboy, Top Gear, The Grand Tour.

Being outnumbered by Romans,

He cannot into Empire again.
Daciaball was an mustached ancient countryball and the great-great-grandfather of

Daciaball has uncommon political influence on its high priest, who is often able to make or break the authority of a ruler. In a way he was more of a theocracy than a kingdom.

His central God is Zalmoxis - God of immortality. He is so fanatical in Zalmoxis' worship that he thinks he is immortal forever and that he cannot really die, because if he dies he joins Zalmoxis.

Daciaball ferocious opponent as he has no fear of death. Herodotus noted that

Daciaball is the bravest of the Thracians.

SPQRball referred to them as "Daci" while

The first mention of

Daciaball is under King Rubobostes in 168 B.C. although there are mentions of Dacian Tribes up to the 7th century B.C.

King Oroles successfully opposed the Bastarnae, blocking their invasion into

Transylvaniaball. Due to an initial failure, King Oroles punished his soldiers into sleeping at their wives' feet and doing the household chores. Subsequently, the now "highly motivated" Dacian army defeated the Bastarnae and King Oroles lifted all sanctions.

Daciaball. He is known for expanding

Daciaball's clay, destroying all vineyards to make his Soldiers more disciplined and for coming into conflict with

At its height under King Burebista

Daciaball's clay included areas over Tisa, Danube,Dniester rivers,Central Europe,Balkans,territories around the Adriatic Sea,greek colonies around the Black Sea and the Eastern Thrace of the Aegean Sea. The Carpathian Mountains were in the middle of

Daciaball. Corresponding to the present day countries of

Moldovaball, as well as parts of

After King Burebista's death in 44 B.C. the kingdom was divided into four then five smaller kingdoms ruled by the religious elite and the Dacian activity was reduced into a defensive state. Despite this division, the related tribes of Dacia fought together whenever they were threatened by a foreign attack.

King Decebalus, the last King of Dacia, completly reunified all Dacian kingdoms like Burebista before him. He then fought 3 wars with

SPQRball under 2 Emperors. In 89 A.D. he defeated a

SPQRball invasion in the reign of Emperor Domitian, forcing

SPQRball to pay tribute to

Daciaball in exchange for peace, as well as securing a period of independence during which Decebalus consolidated his rule.

When Emperor Trajan came to power in

Daciaball again to end the shameful tribute that

SPQRball had to pay as well as rob

Daciaball as it was a rich kingdom, especially in gold. Decebalus was defeated in 102 A.D. but remained in power as a client king.

This victory is probably the darkest victory

SPQRball ever had, due to the crimes committed in

Daciaball, today he would be accused of genocide and crimes against hummanity.

SPQRball, but its name was added to that of the new city (Ulpia Traiana Sarmizegetusa) built by the latter to serve as the capital of the Roman province of Dacia.

In 305, after becoming Emperor, Emperor Galerius affirmed his Dacian identity and exhibited anti-Roman attitude treating the Roman citizens with ruthless cruelty, like the conquerors treated the conquered, all in the name of the same treatment that the victorious Trajan had applied to the conquered Dacians, forefathers of Galerius, two centuries before, even proposing that the empire should be called, not the Roman, but the Dacian Empire, much to the horror of the patricians and senators. This didn't happen and he died in 311 due to a moral disease, possibly a form of cancer or gangrene. 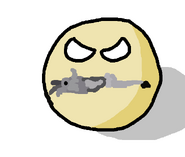 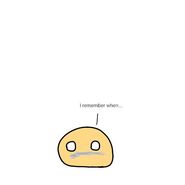 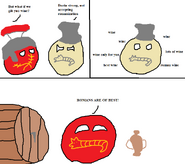 Retrieved from "https://polandball.fandom.com/wiki/Daciaball?oldid=1355408"
Community content is available under CC-BY-SA unless otherwise noted.