Damascusball is the capital of

Syriaball, and likely to be surpassing Aleppoball in terms in population due to the Syrian Civil War. He is the oldest continuous cityball on Earthball. Since he's the big brother of all the cityballs on Earth, he feels he has the right to do what he wants to his little brothers throughout Syriaball's clay, ending up with a chemical attack against his own citizens. This is what stirred up many rebellions throughout Syriaball's clay, as well as a chemical airstrike from USAball. Damascusball's flag and his coat of arms look very similar to each other and their colors are literally the only thing that makes them look different. He is currently very dangerous as hes is in a on-going war. 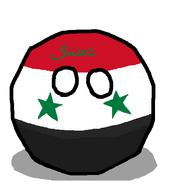 Retrieved from "https://polandball.fandom.com/wiki/Damascusball?oldid=1312682"
Community content is available under CC-BY-SA unless otherwise noted.