Crime (so much crime, police can be hostages)

USAball. He is known to be very kind despite his reputation as being a crime-infested state and is often ignored by the other state and countryballs. Maryland occasionally notices him, but only because Maryland gets bored and likes to poke the little guy around, even though Virginia is watching from the tip of the peninsula.

He loves Steven Universe because the Delmarva state is named after him. He also loves Superman (because DC Comics says that Metropolis is located in his clay)

USAball. He ratified the US Constitution and became a state on December 7, 1787.

Delawareball is the first state ever of

USAball, and the papers were signed in his capital, Doverball, which is the largest city in the state. He is the second-smallest state in the US, and only

Rhode Islandball is smaller than him.

On February 1st, 2017, Delawareball finally became relevant, but for the worse, as he was relevant from a criminal taking the police hostage in his prison, with 1 officer being killed. The criminal lived in his best school district who freaked out and had to stay in school for 3 extra hours. The criminal said he did this to protest against President Donald Trump. Other than this, Delaware is only relevant because of Joe Biden, the 46th President of the United States. 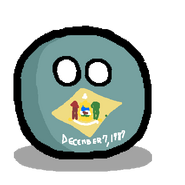 Retrieved from "https://polandball.fandom.com/wiki/Delawareball?oldid=1295109"
Community content is available under CC-BY-SA unless otherwise noted.