Provisional Revolutionary Government of the Republic of South Vietnamball

Vietnamball (until 1977, before his mass genocide)

Not Yet (although the Khmer Rouge did have rocket elephants)

Khmer Rougeball, or Democratic Kampuchea was a historical

Cambodiaball from 1975 to 1979 when under Pol Pot. Democratic Kampuchea was the first nation to order a genocide against it's entire population, which combined with panic of zone leaders caused by

Soviet Unionball building up a massive army against Democratic Kampucheaball and taking drastic action to stop them, ended up with many Khmer dead, He allegedly to be supported by the

Soviet Unionball's influence. He continued to exist to exist in some form in opposition to PR Kampucheaball until the time of United Nations Transitional Authority in Cambodiaball and held the majority of international recognition during this time. 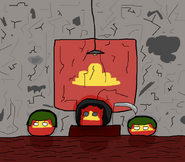 Retrieved from "https://polandball.fandom.com/wiki/Democratic_Kampucheaball?oldid=1322188"
Community content is available under CC-BY-SA unless otherwise noted.