STILL OCCUPIED A PART OF MY CLAY TO THIS DAY

Cannot even into defend himslef. What about space?

The Dervish state was a historic dynasty of

Djiboutiball that lasted from 1890-1918. In its existance, it was scared of

Italian imperialism. From its danger it became friends with

Ottoman Empireball from trading and of course being islamic. This lead for

the Dervish State to become part of the Central powers of world war 1. He was one of the three countries that survived the scramble of Africa, but only so until he was colonized by 3 Europeans and 1 African by 1915.

The Dervish State was helping out

The ottomans with supplies whereas they gave the Dervish State some materials to fight back western and Ethiopian imperialists. At first, the devs won many battles and the

Abyssinians started to fear them. But then with the help of Italian, French and British forces, they lost, having to give up their land to colonization. To this day

Ethiopiaball and lead through separatist movements to reunite with

Drawing the Dervish Stateball is quite simple. First, color the ball entirely with Red and then add two big TEAL rectangles. One inside of another 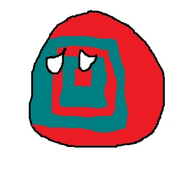 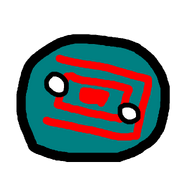 Dervish State is Best State
Add a photo to this gallery

Retrieved from "https://polandball.fandom.com/wiki/Dervish_Stateball?oldid=1306721"
Community content is available under CC-BY-SA unless otherwise noted.