Parrots, being known as the Nature Island, Tea, Kalinago, Pirates of the Caribbean (Was of filmed in Dominica) and the color purple

Hurricanes and being confused with Dominican Republicball

Honk Honk
Dominicaball is a countryball located in the Caribbean. He is very quiet and neutral as well. He also has a pet parrot, which always puts his owner (Dominicaball) in confusion, because the parrot always speaks ill of the people with whom Dominicaball talks.

Dominicaball was born as a

7ball, he evolved into

Caribball. He was first adopted by

UKball invaded him in 1761 during the Seven Years War, and was forced to cede him to UKball.

Nowadays, Dominicaball is an independent republic since 1967.

In 2015, he was nearly killed by STUPID STORM! IT WRECKED ME! Tropical Storm Erika, and many other countryballs like

USAball got worried and came to help. Dominicaball was badly injured.

In 2017, he was nearly killed by ANOTHER STUPID STORM! IT ALMOST WRECKED ME Hurricane Maria, and many other countryballs like

USAball got worried and came to help. Dominicaball was badly injured. 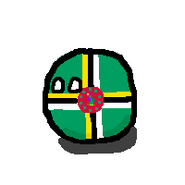 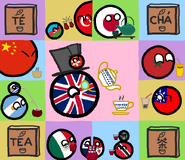 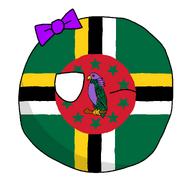 As a female
Português
Community content is available under CC-BY-SA unless otherwise noted.